Security and Connectivity for the IoT Edge 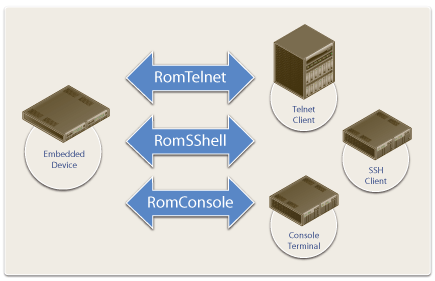 The RomTelnet toolkit provides an embedded Telnet server for standard protocol negotiation with any Internet Telnet client. Multiple simultaneous sessions are supported based on configuration.

For use with a serial line interface, the RomConsole toolkit provides component interfaces to user-supplied serial interfaces. RomCLI AE can use to provide command line services via a serial interface in addition to the TCP/IP-based sessions provided by RomTelnet.

Retrieval and storage of variables are achieved using the RomPager AE Variable Access architecture. An API is provided with built-in routines to convert internal data types to and from external string formats.

The Command Line Handler provides basic line handling functions common to all parsing trees. Command lines are assembled by gathering characters from the Telnet, SSH or serial interfaces and passed to the Parser System for processing.

Included as part of the RomCLI toolkit, this offline tool will save your development team many hours when creating a CLI interface. The CliBuilder takes an XML format description of the command tree syntax including command help, action routines, security realms, etc. and produces the internal parse tree tables and help string tables that are used by the CLI Parser System.

Also included with the RomCLI toolkit, VarBuilder is an offline compiler that takes an XML format description of variables, data types and access routines and then produces a set of interface data structures. The data structures provide the basis for the common and consistent exchange of data between RomCLI and device variable storage.

IoT, PKIs and Roots of Trust